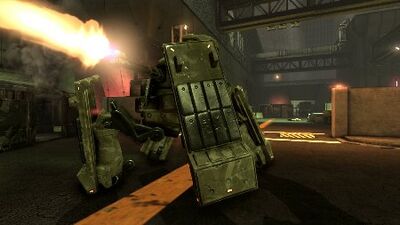 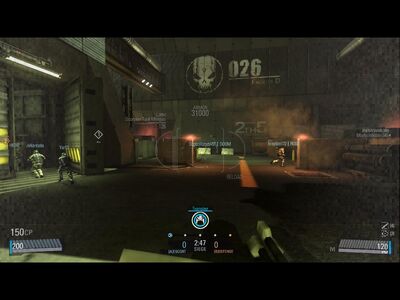 When the tanks health reaches 0 the pilot within the tank is killed and the tank is temporarily disabled. The tank will return to 23520HP or full HP after some time of being destroyed, this time can be instantly eliminated if a Agent on the escorting team uses his or her repair tool on the Scorpion Tank, but leaves the tank vulnerable to attack due to having such low health.

While piloting the suit, you will receive a HUD similar to that of a hardsuits, but does not have any metal plates that obscure the horizontal vision of the pilot. When piloting the Scorpion Tank it will also show a scorpion tank icon above your score which pulses with each step of the tank, this is similar to when you are carrying the flag in the Capture the Flag game mode.

The Scorpion Tank is equipped with a single 'Scorpion Tank minigun' which functions similar to T56 Trident minigun, but fires significantly faster and has a larger clip. Even though the Tank is sent on a fixed liner path, the pilot can aim this weapon in 360 degree angle with the exception of looking directly up or down. This weapon has unlimited ammunition but needs to reload after 250 bullets have been fired, so the pilot does not need to worry about conserving the tanks resources.

In the map Helodeck, there are rows of scorpion tanks in a fenced off area. These seem to have a 2x2 rocket or missile launcher on them.