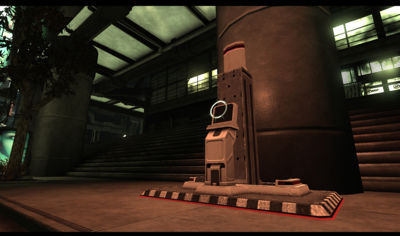 The Hardsuit is a distinguishing element of Blacklight: Retribution. It is a bipedal, heavy armored and armed, mechanized combat suit that is piloted by a player and is designed for battlefield-domination. The Hardsuit, or HS, is available to every player from the start in his depot-loadout. The Hardsuit is only obtainable in-game from the Weapon Depot after the player has earned 1300 CP. It is acquired via an air drop, requiring the player to place the landing-designator in an area with unobstructed access to the sky. Calling in a Hardsuit takes about 2 seconds to secure the landing position, and another 3 seconds for the hardsuit to fall in front of the player. The player who calls the hardsuit in may enter it in under 3 seconds by standing still and holding the "use" key (E by default) on the hardsuit. However, if you are entering someone else's suit, it will take roughly 10 seconds to enter. 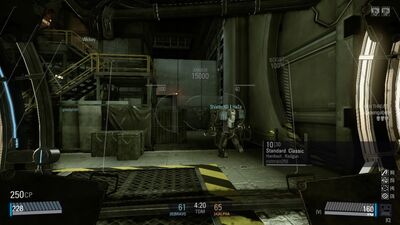 The Hardsuit is equipped with a T56 Trident minigun and a RG057 Ghost railgun. It also sports an Afterburner that, when triggered, propels the Hardsuit straight forward very quickly. The Hardsuit starts with 15000 points of durability. Each summoned Hardsuit features an individual Weak Spot. This Weak Spot is a randomly generated area on the suit which takes 10 times more damage than the rest of the body. It can be identified with the HRV, giving a feedback which is different then that from the rest of the suit. Players may be killed by having a Hardsuit dropped on them, or having it run them over. If a player is unfortunate enough to stand behind the afterburners while it is active, they will be burned to death on the spot. The ram can also do a large amount of damage to other Hardsuits. A partially damaged hardsuit may also be repaired to full health by using the Repair Tool.

There are two pieces of Tactical Gear available to increase the effectivness of a Hardsuit: 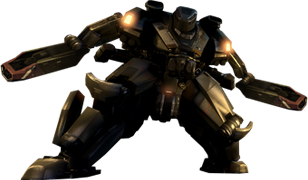 The Hardsuit's killing power is balanced by its slow movement speed and reduced turning ability and although the Hardsuit may seem an intimidating opponent, there are several ways of destroying it. Including the Flamethrower and a Breech Loaded Pistol with incendiary rounds, which can burn the pilot out in a few seconds while leaving the suit relatively unharmed. This leaves the hardsuit empty, available to the enemy for taking. The Hardsuit may also be damaged by the RL5 Armor Stinger, dealing 10,000 damage per successful hit. Both of these Depot Items are available by default to all players regardless of level. Other [Depot Items] can be equally effective, and it is suggested that players experiment to find the item they are most comfortable using. Electro Ammo is also effective. The Breach Hammer can be used to destroy the Hardsuit and pilot simultaniously by striking the weak point twice, although this tactic may be difficult to accomplish depending on the skill of the pilot.

The Hardsuit is subject to several achievable Titles in the game. One title (Brings Death From Above) is rewarded to players that manage to kill another player by dropping a Hardsuit on top of them. The victim will also be rewarded with another title (Got Crushed?). Title number three (Road Kill) is rewarded to you if you manage to run over an enemy player while you use the Hardsuit's afterburner. The fourth title (Highway Bandit) is obtained by killing an enemy player after he summoned a Hardsuit but before he is able to enter it.