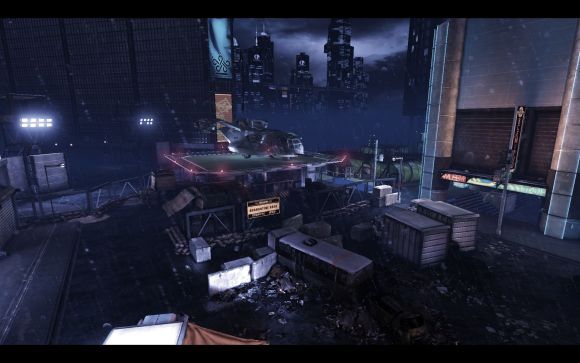 Evacuation, commonly known as 'Evac,' was released with patch 0.991 and is the first map in Blacklight Retribution to have weather effects implemented into the map.

The new Evac map is built with both the wide-open lanes of a sniper alley plus the CQC of a trench raid. The west and north sections of the maps are a destroyed street. Burnt-out buses at each the southwest and northwest corners give snipers an (exposed) vantage point, and grease gunners will have to dash across long stretches of empty to get at them. Duck into the cover of a nearby bazaar in the east half of the map for upstairs/downstairs snap-shot combat.

The visual centerpiece of Evac is an abandoned jump jet and helipad. Once it ferried civilians out of this plague-ridden corpse of a city; now it bears witness as Agents fight over what’s left.

Evac is home to a modern Bicycle leaning against the wall in a building and several grocery stands.

Evac also hosts many advertisements for different companies on walls and interiors of buildings.